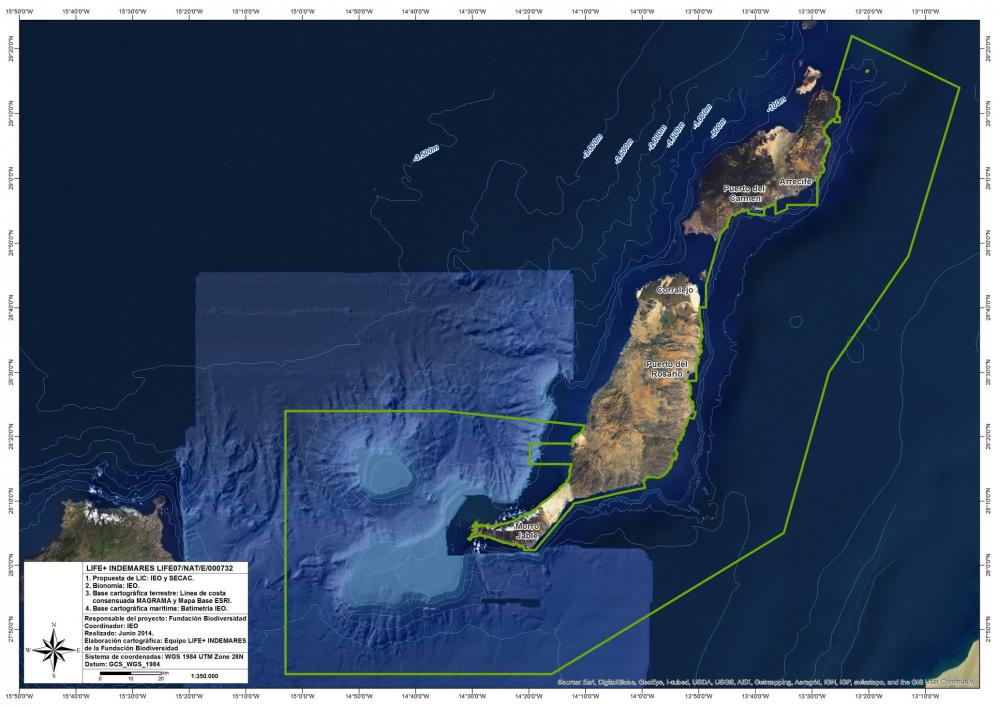 The eastern coast of Fuerteventura and Lanzarote Islands is a true marine sanctuary for cetaceans, with 28 different species being found here, including beaked whales, fin whales, sperm whales, killer whales, dolphins and pilot whales. A third of all cetacean species in the world can be seen in this protected marine area. In addition, two seamounts of volcanic origin located to the southwest of Fuerteventura, the Amanay and Banquete banks, house a great variety of communities, mainly due to the wide range of depths they cover and their orographic complexity.

Reefs (Habitat 1170)
Reefs are hard, compact substrates on smooth, solid bases that rise from the sea floor. They can shelter benthic communities of animals and seaweeds, as well as coralligenous concretions. Included in this classification are diverse habitats according to increasing depth: starting from the gardens of black coral, Antipathella wollastoni, to depths of about 100 meters; passing through forests formed by erect colonies of gorgonian sea fans, Callogorgia verticillata and Narella bellissima, and communities of the sponge Asconema setubalense; down to the deep coral reefs of Corallium niobe and Corallium tricolor that are reached at depths of up to 1,600 meters.

Bottlenose dolphin (Tursiops truncatus)
Cosmopolitan species typical in tropical and temperate regions, although it may also be found in relatively cold waters. It is characterised by being very gregarious. Its very varied diet includes hake, sea bream, mackerel, octopus, squid, and prawns, among other marine animals. The bottlenose dolphin is widely distributed along the marine fringes of both islands. The studies undertaken have revealed the annual residence of bottlenose dolphins in this marine strip, which constitutes a feeding ground, breeding site and nursery area.

Loggerhead turtle (Caretta caretta*)
*High-priority species
(Threatened in the Mediterranean (IUCN Red List 1996))
Cosmopolitan species found in tropical and subtropical waters. Solitary and omnivorous, its diet includes crustaceans, fish, molluscs, seagrass and jellyfish. The east of Fuerteventura-Lanzarote, in particular, seems to have a high presence of this species throughout the year. It is a feeding and development zone for juvenile individuals originating from populations in America and Cape Verde.