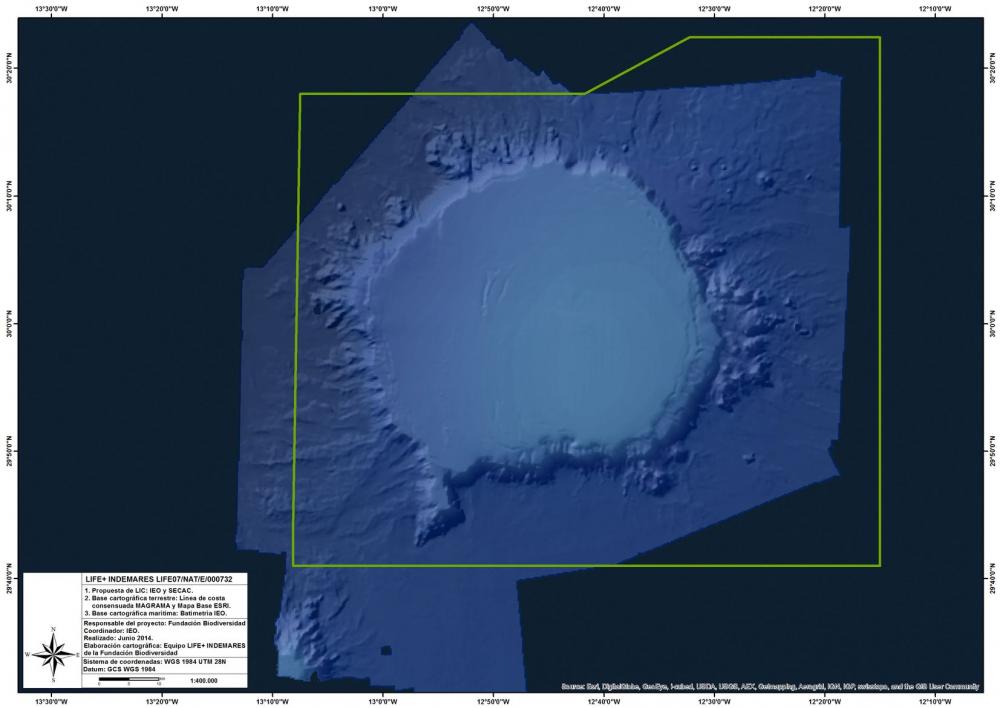 Conception Bank is a seamount located to 75 kilometres to the north of the island of Lanzarote. It rises from a depth of 2,000 m to its summit at a water depth of 150 meters. Its relief, together with the ocean currents, create an upwelling phenomenon, where deep nutrient-rich waters rise towards the surface. These nutrients increase the productivity of the zone, attracting numerous species like cetaceans, marine turtles, sharks and seabirds in search of food.

Reefs (Habitat 1170)
Reefs are hard, compact substrates on smooth, solid bases that rise from the sea floor. They can shelter benthic communities of animals and seaweeds, as well as coralligenous concretions. Within the Conception Bank habitat are cold water coral reefs, colonies of gorgonian sea fans forming forests, and huge fields of sponges.

Bottlenose dolphin (Tursiops truncatus)
Cosmopolitan species typical in tropical and temperate regions, although it may also be found in relatively cold waters. It is characterised by being very gregarious. Its very varied diet includes hake, sea bream, mackerel, octopus, squid, and prawns, among other marine animals. During the censuses carried out, groups of dolphins were observed using the vicinity of the bank for feeding. In addition, it is important to note that there were groups of dolphins with young.

Loggerhead turtle (Caretta caretta*)
*High-priority species
(Threatened in the Mediterranean (IUCN Red List 1996))
Cosmopolitan species found in tropical and subtropical waters. Solitary and omnivorous, its diet includes crustaceans, fish, molluscs, seagrass and jellyfish. The waters around the bank are a feeding ground and an area where juvenile individuals from populations in America and Cape Verde develop.

Seabirds
Upwelling in the zone attracts an important number and diversity of seabirds looking for food, including breeding birds from the nearby island archipelagos of the Canaries and Salvajes (especially Cory's shearwaters and band-rumped storm petrels), those using it as a stopover (several species of shearwaters, skuas and terns), and overwintering birds (like Leach's storm petrels). The densities of band-rumped storm petrel are the highest registered in Spanish waters. It is necessary to emphasize the regular presence of very rare species, like the Fea's petrel, as well as sightings of species that are extremely rare in European waters (like the black-bellied storm petrel, Swinhoe's storm petrel, south polar skua and red-billed tropicbird).