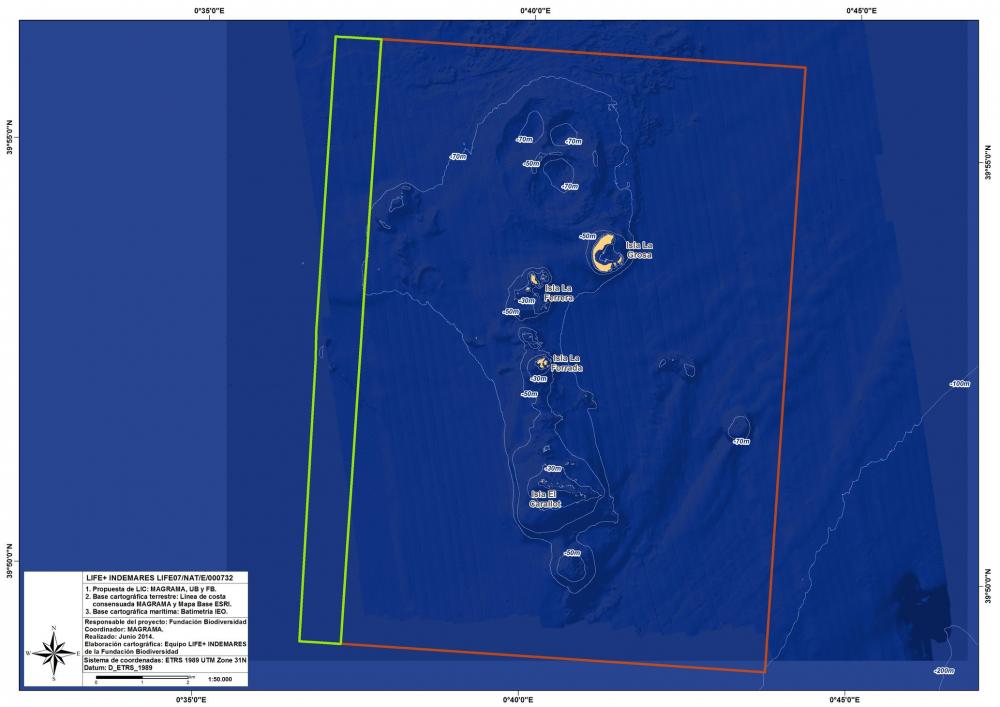 The Columbretes Islands are the emergent part of an extensive submarine volcanic field situated near the end of the vast platform located to the south of the Ebro estuary. The volcanic origin of the Columbretes Islands is especially unusual on the Mediterranean continental platform and has led to a rich and unique flora and fauna, both in the terrestrial and marine realms. The sea floor houses unique and well-conserved Mediterranean habitats. These values, together with the importance of the zone for cetaceans and seabirds, demonstrate the need to increase the existing SCI.

Reefs (Habitat 1170)
Reefs are hard, compact substrates on smooth, solid bases that rise from the sea floor. They can shelter benthic communities of animals and seaweeds, as well as coralligenous concretions. This zone is home to extraordinary communities dominated by long-lived, structural species such as gorgonian sea fans (Paramuricea clavata, Eunicella singularis, and E. cavolinii), fucal algae from the genera Cystoseira and Sargassum, as well as laminaria algae, such as the significant Laminaria rodriguezii, which typically lives at depths of more than 60 meters, and which has been found at depths of around the 40 meters associated with upwellings of sea floor gases that correspond to habitat 1180. At shallower depths huge colonies of the endemic coral Cladocora caespitosa form reefs unique in the Mediterranean Sea because of their density and extent.

Cosmopolitan species typical in tropical and temperate regions, although it may also be found in relatively cold waters. It is characterised by being very gregarious. Its very varied diet includes hake, sea bream, mackerel, octopus, squid, and prawns, among other marine animals. A high density of bottlenose dolphins is found in waters close to the archipelago of the Columbretes islands. These waters make up a breeding and feeding area for this species.

Loggerhead turtle (Caretta caretta*)
*High-priority species
(Threatened in the Mediterranean (IUCN Red List 1996))
Cosmopolitan species found in tropical and subtropical waters. Solitary and omnivorous, its diet includes crustaceans, fish, molluscs, seagrass and jellyfish. Both the Ebro Delta and the surroundings of the Columbretes Islands constitute a very important zone for turtles. It is an area used by specimens originating in the Mediterranean Sea and Atlantic Ocean, as a feeding area for juveniles and sub-adults and more than likely as a wintering ground.

Seabirds
The SPA of the Marine Area of the Ebro Delta-Columbretes Islands protects one of the most productive marine zones in the Mediterranean. There is an abundance of prey for the birds (small pelagic fish) and an important fishing fleet (the birds also take advantage of catch discard). It is necessary to emphasize that the SPA is home to the main colony of Audouin's gull (Larus audouinii) in the world (2/3 of the total population, which reproduce on the Ebro Delta and feed in the zone), and, at breeding time, it is also the main feeding area of the Balearic shearwater (Puffinus mauretanicus). In winter, nearly half of the world's population of Mediterranean gull (Ichthyaetus melanocephalus) also concentrates in these waters. Altogether 11 seabird species of global or regional (European) importance are found in the zone.