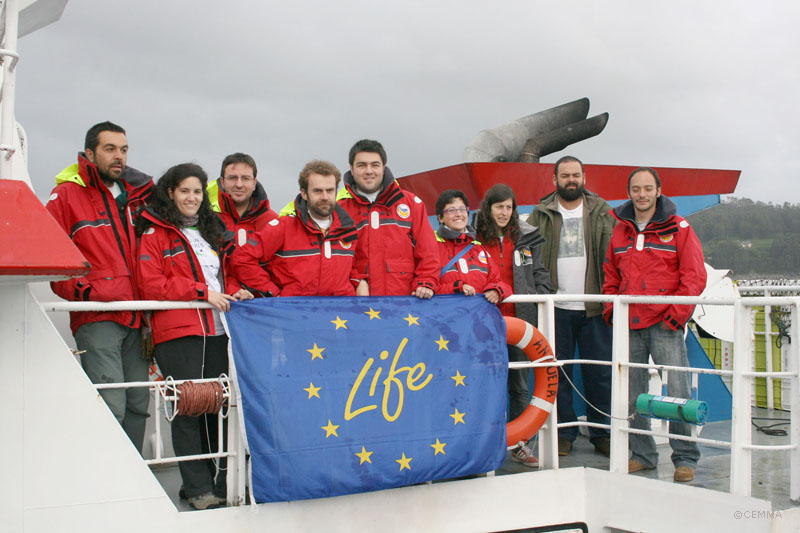 The 2010 campaign for the LIFE+ INDEMARES project took place from May 15th through May 23rd at the Banco de Galicia, an area located approximately 150 miles off the coast of Galicia. A team from CEMMA, consisting of nine people and headed by the specialist José A. Martínez Cedeira, covered the entire marine area collecting data on cetaceans and birds, in addition to graphic and acoustic information on cetaceans, for the purpose of acquiring more information to support the future protection of this area. During this expedition, a sample of the birds was also taken by the head observer of the SEO, Beneharo Rodríguez Martín.

This year, as the ship SANTIAGO APOSTOLO of Celeiro—which had been used in the previous campaigns at the Banco de Galicia—is not available due to being beached for construction repairs, the expedition took place on the long liner ANXUELA—also based in Celeiro—a ship with similar characteristics, 30 meters in length and 7.50 meters in breadth, under the command of its respective skipper and supervision of the skipper Eduardo Minués, who was the technician in charge during the previous expeditions. The characteristics and working conditions were similar in both expeditions and, therefore, will not influence the work performed and the subsequent processing of data.

The methodology that was used during the campaign was that established during previous meetings of the cetacean study groups who work on this project. Rotations in groups of three people were established in order to carry out the observation of cetaceans: one at the right-hand side of the ship and another on the left-hand side at an observation station measuring approximately 8 meters high, and another under cover in the bow of the ship at about 4.5 meters above sea level and at about 6 meters, in an observation station created for this study at a higher elevation. In addition, a fourth person, also located in the raised observation station, was responsible for observing cetaceans as well as collecting data every 20 minutes on the meteorological conditions, position, depth and course. The observation was carried out within a 90º field of vision from the right-hand side of the ship and 90º from the left-hand side of the ship. At the same time, several people were in charge of taking photos of the cetaceans for photo-ID and behavior, and another person made recordings in order to study the behavior.

The campaign lasted a total of nine days, with seven days spent working in the area of the sampling at the Banco de Galicia, covering a total of 938.671 km. Some predesigned linear transects were followed, with the total hours of sampling amounting to 68.236 hours. Additionally, 212.827 km were sampled, corresponding to 8.284 hours of time spent observing, during the trips back and forth to the Banco de Galicia.

During the sampling of the study area, the observation period had to be shortened on various occasions due to bad weather. In addition, in some cases, the observation station in the bow had to be eliminated, moving the observer to the upper station due to the poor conditions of the sea.

In the study area, a total of 56 sightings were made. The species observed were: common finback (Balaenoptera physalus), common dolphin (Delphinus delphis), striped dolphin (Stenella coeruleoalba), killer whale (Orcinus orca), common bottlenose dolphin (Tursiops truncatus), grey dolphin (Grampus griseus) and Cuvier's beaked whale (Ziphius cavirostris).  In addition, in two of the sightings, it was not possible to identify the species of cetaceans observed.

In all of these sightings, an acoustic recording of the dolphins was made, and also of a sperm whale, which was not detected visually, obtaining recordings of whistling, clicks and other sounds to be processed afterwards.

On March 14th of this year, just off the beach of Basteira, in the municipality of Cariño, a loggerhead turtle (Caretta carettak) was sighted adrift. The species was collected, with the assistance of GRUMIR of Cariño, by the mobile unit for beaching in Northern Spain - CEMMA, an organization under the General Office of Conservation of the Xunta de Galicia, in charge of working to recover endangered marine fauna. The turtle was classified as Basteira 01-2010.

The turtle's front left fin had been amputated and it suffered mild pneumonia. During the first phase of recovery, the turtle was treated at the intensive care unit located in the village of SGHN-Ferrol. The second phase of recovery began on March 21st, when Basteira was transferred to the Galicia Aquarium of O Grove so it could become strong enough in order to be released.

After the necessary veterinary checkups on May 10th, the head of the Veterinary Unit decided to release and free Basteira, which was planned during the expedition that CEMMA will make to the Banco de Galicia as part of the LIFE+ INDEMARES project. Basteira was released into the Atlantic on May 15th, with the assistance of the Anxuela crew members. 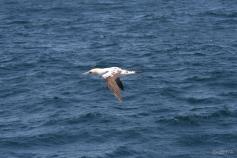 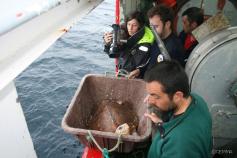