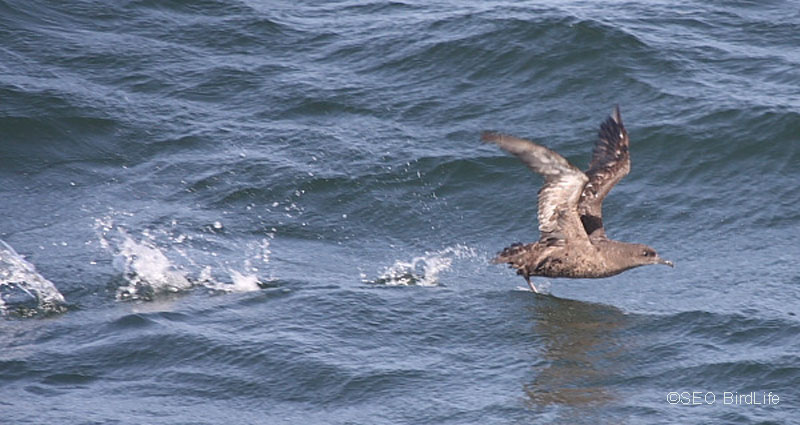 One of INDEMARES’ target areas is the Banco de Galicia, situated some 120 nautical miles to the west of the Galician coast. This submarine mountain is important as it is an area with the rising of deep waters that gives rise to a high productivity. This favours the concentration of pelagic species such as sharks and cetaceans. Furthermore, the area has interesting benthonic communities that have not been studied very much yet. The most western area of the bank has been identified as a potential marine IBA.

The main ornitic value detected for this area consists of a high presence of Madeira petrel at the end of the summer and the start of the autumn, with estimates that exceed 500 specimens simultaneously. This is of particular interest if we bear in mind that observations of this species in some Spanish peninsular waters outside the Bank are extremely rare.

They are probably pre-reproductive individuals from the different colonies of the Macaronesic region, as well as the Berlengas islands (on the central Portuguese coast), that concentrate here after migrating from the waters of the Gulf Stream, making the most of the local productivity peak that occurs at the end of the summer and start of the autumn. It is important to confirm the regularity of the observed pattern and to define the dates when the species is present on the Bank.

An observer from SEO/BirdLife took part in the CEMMA-Banco de Galicia-May 2010 campaign, the main objective of which was to study the cetaceans in the area.

The campaign took place from 15 to 23 May 2010 on board the Anxuela long liner fishing boat, based in the port of Celeiro (Viveiro, Lugo, Galicia). The campaign consisted of a systematic scanning of the Banco de Galicia using transects directed at the observation of cetaceans, and also adapted to prospect birds. Data was also taken during transects carried out in the outward and return journeys between the port of Celeiro and the Bank.

Estimates of marine bird densities (birds/km2) and relative abundance (birds/km) were carried out, following standardised methodology. During the campaign, a total of 372, 10 minute census units were carried out (in transect), with a total distance of 809.3 km covered and an area of 485.6 km2.

A total of 1628 marine birds were counted in the censuses in transects, belonging to 19 species. Overall, the yellow-legged and lesser black-backed gulls were the most abundant species by far, followed by the Atlantic gannet, Sabine’s gull, common tern, great back cormorant and Balearic shearwater. Strictly on the Bank, the most common species were, in descending order of abundance, Sabine's gull, common tern and Wilson petrel.

The campaign has provided interesting information on the Banco de Galicia at a time of the year there was very little information for this enclave, the spring. The data confirm the great singularity of the ornitic values of the area, the results of the campaign suggest that the importance of the Banco de Galicia from a conservation point of view is modest in the spring. With the available information (see Arcos et al. 2009, Sandoval et al. 2010), the ornitic importance of the Banco de Galicia is much more important at the end of the summer and start of the autumn. At this time of year, the most important known value is the regular presence of Maderia petrel Oceanodroma castro (Arcos et al. 2009), which makes this a unique place in the context of Spanish Iberian waters.

Future efforts in the area will have to be concentrated in summer-autumn, particularly in September.