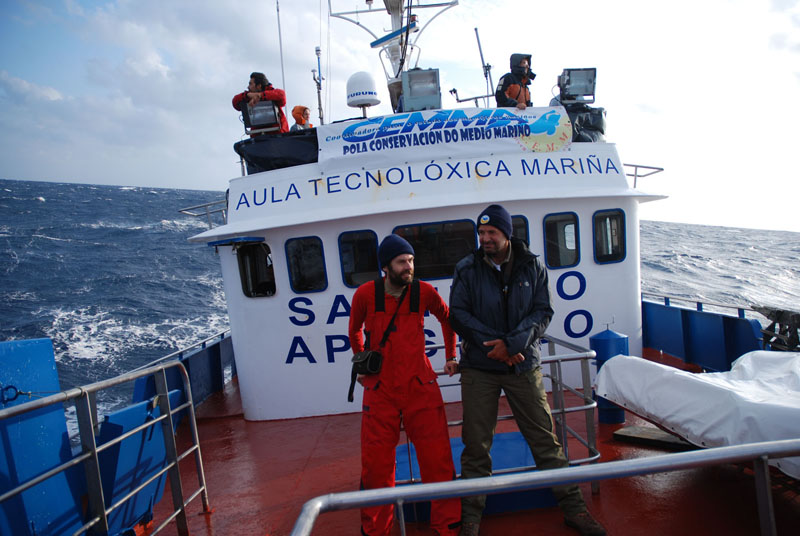 The first INDEMARES campaign in Banco de Galicia started last September 14th. Throughout the week, until Tuesday September 22nd, there were bird and cetacean sightings at some 150 miles off the Galician coast.

The CEMMA team in charge of this expedition consisted of ten people, under the leadership of Jose A. Martínez Cedeira. Among its members, there was an ornithologist, who coordinated the gathering of data on the sea birds, two acoustic specialists, who recorded the presence of the cetacean species with the sound equipment, and audiovisual specialist, in addition to the sighting specialists.

The campaign was held onboard the Santiago Apostolo longliner, turned into a Marine Technology School by the Fishermen’s Guild of Celeiro.

The sighting group travelled a total of 706 km, following some pre-designed linear transects, with a total sampling time of 74.36 hours. Also, there were 262.59 km sampled, corresponding to the round trips to Banco de Galicia.

The cetacean sightings were performed in three-people shifts: one to starboard, another to port in a sighting post at some 7 meters high, and a third in the ship’s bow, at 4 meters above sea level. A fourth person, also from the elevated sighting post, was in charge of collecting data on the weather conditions, position, depth, and course. A fifth observer was in charge of the sea birds census during the whole campaign.

The area samplings had to be cut short due to unfavorable weather conditions. In several occasions, the bow sighting post had to be cancelled, with the observer being transferred to the higher post, due to the poor sea conditions. With all this, it was decided to repeat one of the routes that was in the middle of Banco de Galicia, to obtain the data with better sea and wind conditions. 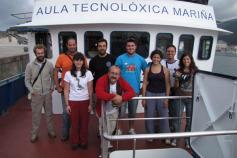 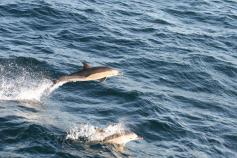