The expedition was carried out on board the Miguel Oliver observation vessel, under the supervision of the Secretariat General of the Sea, between June 23rd and  July 7th 2011. The censuses of seabirds took place on the journeys between the various sampling stations.

During the daytime navigation periods, censuses of seabirds were taken via transects using Tasker et al. (1984) standardized methodology, adapted by SEO/BirdLife (2007) to the area under study. Specific censuses were also carried out at fixed stations while the vessel was stopped and no activities were taking place on board that could potentially alter the seabirds’ behavior.

The weather, including both sea and wind conditions, affected the entire expedition. Most days there were gales from the north. Due to high waves, the decision was made not to do transects on June 24th and July 4th because of the difficulty in observing small procellariforms which go unnoticed between the waves. Even so, observation at a fixed station was done on June 24th.

The census was taken in an area spanning a total of 423.8 km2, spread over 158 transects lasting 20 minutes. Over this itinerary, 20 bird species were observed, 18 of which were strictly seabirds. This reveals considerable diversity bearing in mind the great distance from the coast.

In the censuses taken in the Banco de La Concepción area, 601 birds were counted (297 of them within the transect), belonging to 14 different species, 13 of which are seabirds. Cory’s shearwaters Calonectris diomedea (503 birds) clearly prevailed, followed at a great distance by the Bulwer petrel Bulweria bulwerii (57 birds), the yellow-legged gull Larus michahellis (13 birds) and the white faced storm petrel Pelagodroma marina (10 birds).

In addition, 13 censuses were done at fixed stations where a total of 180 birds belonging to 15 different species were observed, including 125 Cory’s shearwaters, 12 yellow-legged gulls, seven Bulwer’s petrels and seven white faced storm petrels).

The results of this expedition show, first of all, the exceptional diversity of seabirds frequenting the area (18 different species were sighted) despite its great distance from the coast. Some of these species are very rare in Spain, and are even extremely sensitive, such as the Fea’s petrel (Pterodroma feae). Based on Annex I of the Birds Directive, the number of band rumped storm petrels (Oceanodroma castro) and white faced storm petrels (Pelagodroma marina) also seems outstanding for these species, while other petrels seem to be more rare. The most abundant species however is clearly the Cory’s shearwater. This concurs with previous campaigns and the remote monitoring data that led the area to be proposed as a potential Important Bird Area (IBA) (Arcos et al, 2009). The data obtained from this expedition supports this proposal, and together with other data from previous expeditions, it enables us to confirm the importance of the area, which should formally become an IBA and therefore also become an SPA (Special Protection Area).

It should be stressed that the data presented here should be taken as very conservative, since the seabird censuses during the INCOECO 0611 expedition were curtailed due to poor weather conditions. The weather was poor nearly all of the days of the expedition, and very bad on certain days when it was decided not to observe seabirds. This distorts the observation of small procellariforms, basically petrels, which are the hardest to observe in poor weather conditions.

In any case, it should be said that only a few groups of feeding seabirds were observed, and the few observed involved interactions between seabirds and cetaceans. The groups were not numerous with the exception of a group of 200 Cory’s shearwater, Bulwer’s petrels, storm petrels, and some whales. The areas where the few feeding groups were observed, and where seabirds and cetaceans interacted, feeding off fish, were always on the sides of the Banco de la Concepción and never in the center.

SEO/BirdLife would like to thank Sebastián Giménez Navarro and Pablo Martín-Sosa from the IEO, as well as the INDEMARES staff from the Fundación Biodiversidad for its willingness and support in allowing a SEO/BirdLife observer on board for the census taking of seabirds during this expedition. We would also like to thank the scientific staff on board the “Miguel Oliver” observation vessel for its support during the expedition. 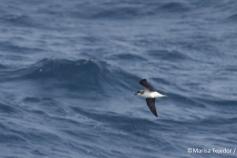 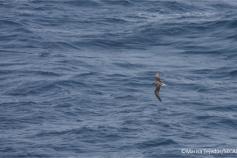 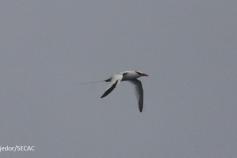