The Spanish Institute of Oceanography carried out a campaign at the Banco de la Concepcion, an area located in the Canary Islands. The campaign took place from March 17th to March 31st, and included the participation of another partner in the project, SEO BirdLife, which took samplings of birds, cetaceans and turtles. The campaign was carried out on board the ship Vizconde de Eza, which belongs to the Ministry of Rural, Marine and Natural Environment, also a partner in the project.

The Banco de la Concepcion marks the extension of the Fuerteventura – Lanzarote axis towards the Northeast. The few geological and geophysical studies that exist on the Banco de la Concepción classify it as an underwater mountain of volcanic origin. The objectives undertaken in this campaign, called INCOGEO 0310, consisted of:

Based on the previous studies, the main objective of this campaign was to develop a three dimensional map of the sea bottom and subsoil which would enable studying its nature. Thus, during the campaign, priority was given to the bathymetric elevations with the multibeam echosounder.

In addition, with the information obtained, a bathymetric map and maps of the characteristics of the sea bottom will be created, a microphysiographic and morphological study of the areas analyzed, and a study of the seismic strategy and structure of the Banco de la Concepción will be performed.

A mapping of the habitats was also made, which along with the biological, ecological, fishing and physical information, enables evaluating the existence of vulnerable ecosystems and habitats.

It is worth noting that in addition to all of the information obtained, it is included in a Geographical Information System for the INDEMARES project.

The preliminary results, without a careful analysis of the data, appear to suggest that the Banco de la Concepcion is an underwater mountain of volcanic origin with a near circular morphology. The roof of the Banco de la Concepción is, broadly speaking, a rather flat surface, with bathymetries that vary from less than 200 m up to 1,500 m in the W part of the roof and 800 m in its E flank. 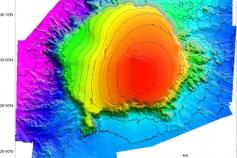 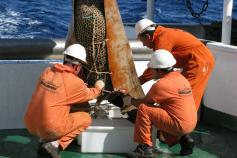