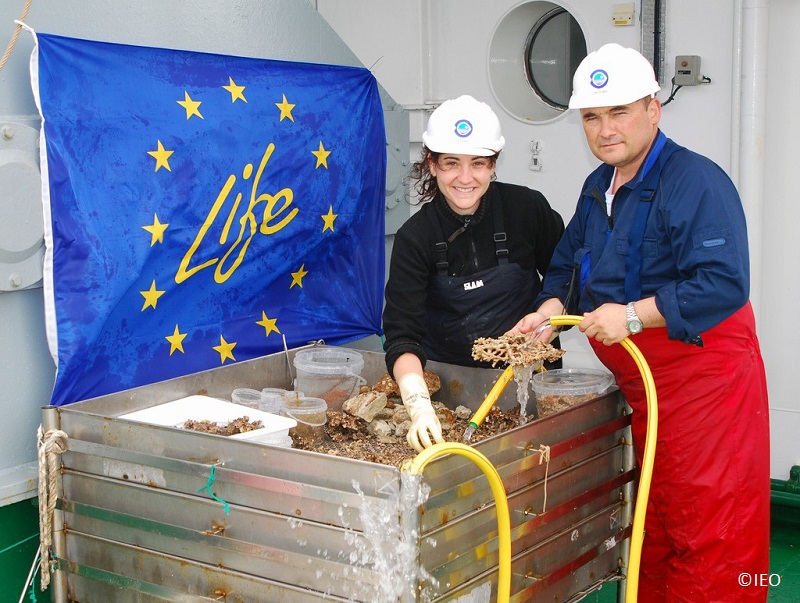 Between  April 19th and May 13th, the INDEMARES-AVILÉS 0410 expedition was carried out on board the oceanographic vessel Vizconde de Eza (SGMAR) with the aim of running a bathymetric multi-beam survey and a high-resolution seismic reconnaissance of the area under study, as well as to obtain rock and sediment samples from the seabed.

The bathymetric survey done during this expedition with a multibeam echosounder found the most outstanding morphological element to be the Cañón de Avilés. The morphology of the continental side of the region studied is both abrupt and complex, and encompasses other fairly notorious submarine canyons such as the Pozo del Corbiro and the Pozo de la Gaviera canyons, as well as the Canto Nuevo and Agudo de Fuera bathymetric outcrops.

A multibeam echosounder was used for morphology analysis, and a preliminary bathymetric map of the area under study was put together based on the data obtained. A general grid with a 100 m resolution was calculated of the bathymetry of the entire survey.

The main physiographical dominions identified in the area under study are on part of the continental shelf, which is demarcated by a change in gradient, and has an upper and lower slope, the latter of which is characterized by steeper gradients. By crossing the slope area until reaching the shelf, an area marked by canyons was found. This area is characterized by steep gradients on its flanks, which cut across the continental side. The courses of the submarine canyons converge at the foot of the Avilés Canyon, gently giving way to an abyssal plain. The connection between the abyssal plain and the lower slope is generally fairly clear.

Based on the data obtained from the Topas PS 018 sub-bottom profiler, very high resolution seismic profiles were obtained, enabling the first meters of the seabed to be studied in areas where system penetration was acceptable. In the seismic recordings obtained, an irregular alternating pattern between areas covered with sediment and areas with rock outcrops was found. Rocky areas were also identified on the continental slope, but there were also some regions appearing to be sedimentary.

Rocky outcrops are highly abundant in the shelf area and generate relief of up to 25 m. One example is rocky area between the Avilés Canyon and the Pozo del Corbiro. However, the steep gradients preventing quality seismic profiles from being obtained make the slope areas difficult to seismically characterize.

The preliminary results indicate that benthic megafauna captured shows dominance of the phyla Porifera, Cnidaria and Echinodermata in both biomass and diversity. According to internationally established criteria set by the UN and the OSPAR, a large portion of organisms considered to be vulnerable belong to these groups.

A total of 17 stations were sampled for studying infaunal communities and sedimentary characteristics (granulometry, organic content, and redox potential). The redox observed in the stations sampled indicates good general oxygenation of the top layers of sediment. The soft bottoms sampled during the expedition are dominated by types of sandy sediment, basically formed by medium or very fine sands with organic content that ranges from low to moderate. The samples taken with a TFS-2 photogrammetric sledge were placed at depths of between 160 and 875 m and taken on both non-consolidated sediments with severe inclines in the canyons and on the rocky outcrops on the shelf.  A total of six different habitats could be identified in the area under study. These habitats have varying degrees of structural complexity and specific biological communities with different strategies for adaptation. 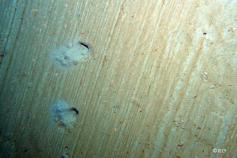 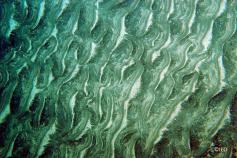