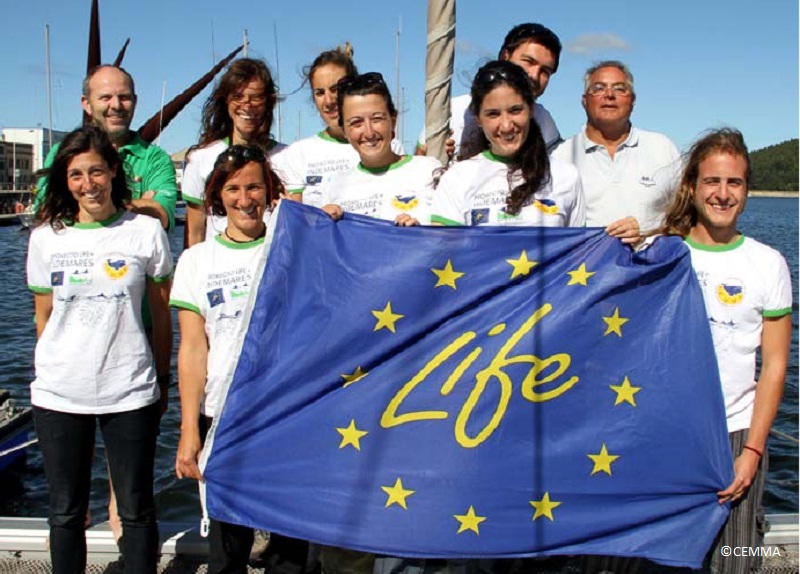 From October 3rd to October 9th 2011, a team of eight CEMMA biologists/oceanographers worked in Avilés on board the Gran Bahía II catamaran.

Due to the distance between the coast and the area under study, three subareas (B, C, and D) were established where, in order to take advantage of the trips out to the main area under study, an observation effort was made to detect cetaceans and seabirds on the outbound and inbound journeys.

To do the second year of sampling of the Cañón de Avilés, the same zig-zag transects designed in the first expedition were used. The surveying of cetaceans was done as it had been on previous expeditions. Two observers located at sea level did sweeps on surface level while the third observer gathered data on the various information variables. The track was recorded both in GPS in the data collection stand and in an additional GPS connected to a computer. Daily tracking was done in order to check on the route and make back-up copies every hour.

When there is a sighting, the first thing that the person collecting general information does is to mark a waypoint on the GPS in order to record the exact position of the vessel during the sighting. Other data are also taken down are the time, position, depth and course of the vessel. If the sighting has to be confirmed, all of the observers on the shift off duty will work on searching for the cetaceans in order to confirm it.

Should not sighting not be of bottlenose dolphins (Tursiops truncatus), long finned pilot whales (Globicephala melas) or other species with which photo-identification can be used, then the observer on the coast where the sighting was made confirms the species and monitors the cetaceans in order to later fill out the sheet.

An acoustic survey was also done for which a trawl hydrophone was used, enabling continuous recording and listening in real time to the sounds recorded.

On this expedition, the same observers working on the cetaceans also did the recording when seabirds were cited during the sailing. The data were taken using the “snap-shot” methodology explained by the SEO/BirdLife team. Subsequent data processing was performed by SEO/BirdLife.

Once in port, weather reports were analyzed, GPS was downloaded, transect data and data from sightings of cetaceans and seabirds was put into the computer, audio files were downloaded from the trawl hydrophone, as were files from the cameras, the video recordings over the course of the day were minuted, and equipment was cleaned.

The campaign included a total of 48.23 hours of navigation over six days of sampling. Although the scheduled hours and prospections were covered, several days were suspended due to inclement weather conditions.  The surveying time encompassed 565,116 km sailed and 503,772 km2 sampled.

A total of 18 cetacean sightings were made, 15 of which were systematic and 3 opportunistic since they were detected by an off duty observer. The species observed were: bottleneck dolphin (Tursiops truncatus), long finned pilot whales (Globicephala melas), Cuvier’s beaked whale (Ziphius cavirostris), striped dolphins (Stenella coueruleoalba), delfín común (Delphinus delphis), minke whale (Balaenoptera acutorostrata), common rorqual (Balaenoptera physalus), a non-identified delphinae and a non-identified whale species. The presence of seabirds in an area with a depth of 86 m is noteworthy as it indicates the species’ use of the coastal habitat.

Northern gannets of all ages were observed as well as large flocks of great shearwaters, including certain other species of shearwaters such as the sooty and Balearic shearwaters. A sandwich tern being attacked by a great skua was also witnessed.

On this expedition, Portuguese man-of-war (Physalia phisalis) sightings were made, though the individuals were small. Twelve oceanic sunfish (Mola mola) were seen, most of the time jumping several times in a row.

Particularly on the first two days, large groups of skippers jumping in banks were seen being chased by Bluefin tuna, and great shearwaters and northern gannets. On the remaining days, this behavior was barely seen, perhaps due to a 5ºC drop in the water temperature (from 20ºC to 15ºC).

A lesser amount of rubbish, mainly bottles, soft drink cans, wood, and fishing gear was observed than on other expeditions, although a tree floating at sea was sighted and the catamaran had to be stopped to remove the remains of a fishing net caught in the boat’s propellers. 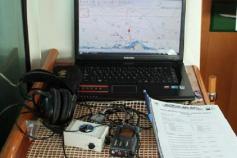 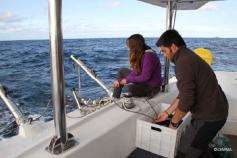 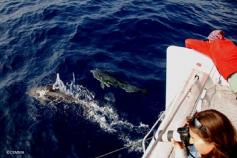 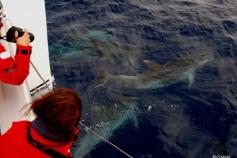 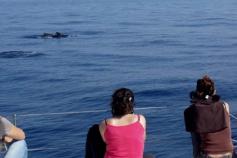 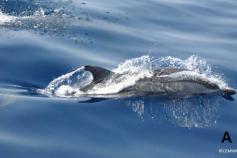 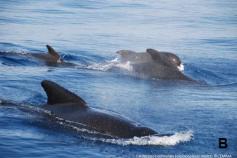 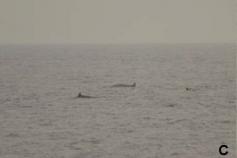 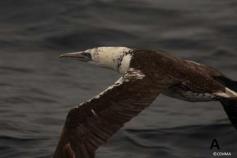 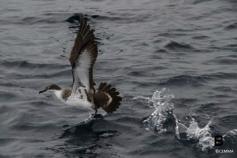 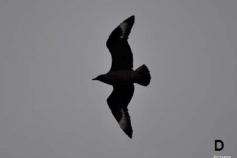