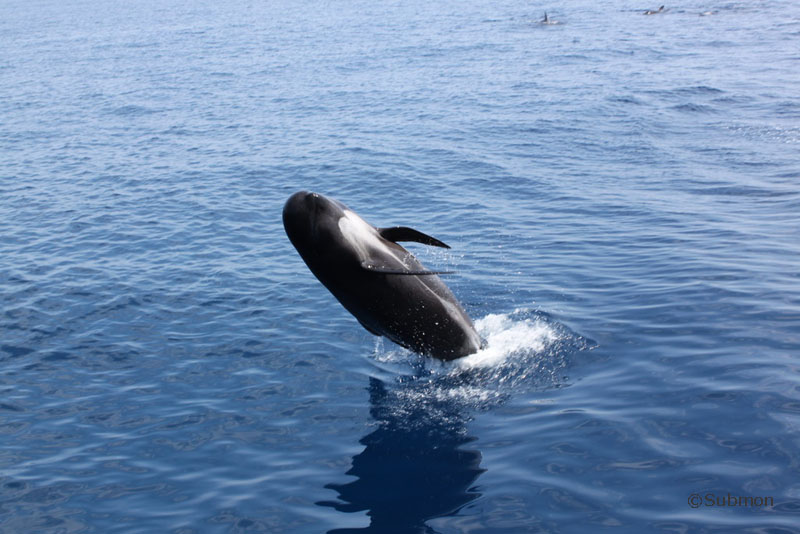 SUBMON carried out its cetacean study campaigns in the North-western Mediterranean area, for the Cañón de Creus and Canal de Menorca areas, during July 2010, in the work framework regarding the complementary actions of Life+ INDEMARES recording marine turtles and cetaceans in the three marine areas proposed for the Natura 2000 Network in the North-Western Mediterranean.

In order to record cetaceans in the Cañón de Creus area, a sighting cruise with predefined transects in an area measuring 2389.82 mm2 was carried out, which included the area proposed as Natura 2000, which covers from the coastline to up to 35 miles out to sea. In total, a sample of 735.4 km of effective effort has been sampled.

A 15 metre motorsailer was used for the visual transect, in which two observers, one in a crow’s nest 4 metres above sea level and another on the deck, looked for cetaceans. The status of the different environmental data that can affect the detection of the animals were collected every 20 minutes during the transects.

A 200-metre two-channel trawl hydrophone was used for the acoustic transect. The hydrophone was trawled from the stern of the boat at an average speed of 6-7 knots. The recording chain was carried out using an amplifier and an analogue to digital signal converter, and a low frequency filter and a computer, which with specialised software has interpreted the sounds produced by the cetaceans.

The density of the animals in the area can be observed thanks to the visual transect, that will vary depending on the depth, the species and how easily seen they are. This will give an idea on the distribution of cetaceans in the area.

Acoustically speaking, the use of a hydrophone has allowed increasing the detectability of species that are generally more difficult to see, such as the sperm whale. In this sense, it has been discovered that the Cañón de Creus is an important feeding area for this species, which has represented almost 30% of the total sightings made. The detections were always made during feeding periods.

On the other hand, sightings of striped dolphins, which come from this area, and rorquals and black pilot whales, have been made. The latter should be studied as possible resident populations, and we have therefore started a photo-identification catalogue for future studies.

The Canal de Menorca is characterised by being not very deep and situated in a crossing area between Ciudadela (Minorca) and the Alcudia Bay (Majorca).

Due to the bad weather conditions, it was not possible to cover all of the scheduled sampling days. At the end of the campaign, 211.5 km of effective work had been carried out inside the area, which was made up of a surface area of 2461 km2. The only species observed in the area was the bottlenose dolphin, which is the commonest species in the Balearic Islands, where, generally, the highest density of bottlenose dolphin in the North-western Mediterranean concentrates. Nevertheless, other species have been seen on other occasions, such as rorquals, or some common dolphins. 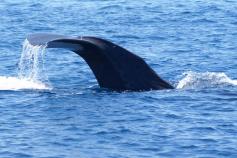 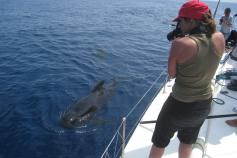