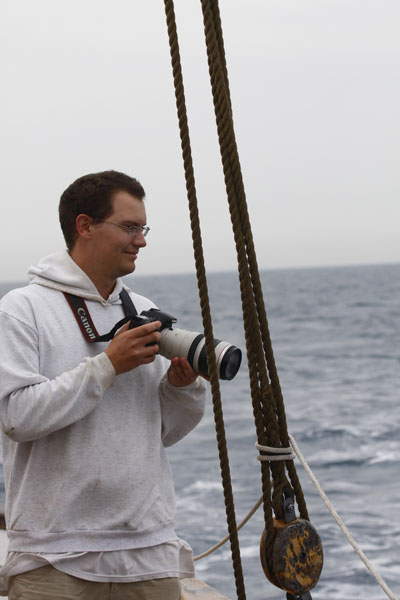 The organization CIRCE, along with ALNITAK, carried out the third campaign in Chimeneas de Cadíz from January 15th to February 22nd. Throughout the campaign, the climate conditions were not ideal, although the work performed was fruitful.

Various sightings were made, which emphasizes and continues to underscore that the Golf of Cadiz is an ideal place for finding common bottlenose dolphins. During this campaign, we were able to take more than 5,000 pictures of these dolphins, which will serve to fill the identification catalogues. The catalogues have not yet been compared, but it appears that the groups observed are those that are usually observed in the rest of the Gulf of Cadiz, this area thus being their habitat.

In addition, porpoises were also observed in two sightings ten miles from Chipiona, which is included in the annexes of the Habitats Directive as a species that is a priority for protection. This species measures about 2 meters long and lives in groups of 5-10 individual porpoises. Its timid nature and the little time that it spends at the surface of the water make it a very difficult species to observe, which is why it is extraordinary news, given that the species is also practically extinct in the Mediterranean

During the campaign, random transects were made in the study area. During each sighting, the boat stopped in order to be able to take various photographs, enabling approximately 5,000 new photographs of common bottlenose dolphins to be taken, which are now being analyzed. A total of 400 kilometers were travelled.

The next campaign will take place in April. In addition, and due to the poor weather, it was decided that a 15-day campaign would also be carried out during the month of May, from the catamaran in the coastal waters of the Gulf of Cadiz. In the same manner, and in order to strengthen these campaigns, the volunteer campaigns that CIRCE carries out in the waters of Barbate will be included. The goals of these campaigns is to study the energetic balances of orcas; however, as an exception, this year will also focus on searching for groups of porpoises and common bottlenose dolphins, which may contribute information to the INDEMARES project.