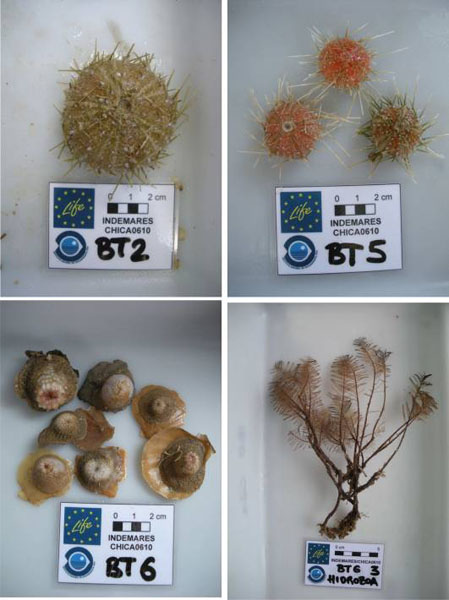 Last June the IEO carried out the first campaign in Chimeneas de Cádiz. The campaign was carried out on board the Emma Bardán boat, which belongs to the General Department of the Sea.

This campaign was centred on the most superficial areas, where signs that point towards the existence of structures related to the expulsion of fluids were detected. We have given priority to three places to prospect in this campaign:

The following objectives have been established for the campaign:

Different methods have been used for carry out these objectives:

It is a high resolution system that works at depths of 0.5 to 200 m with a frequency of 300 KHz and which has a coverage of over 10 times the depth, to measure depths via the transmission of acoustic pulses from the surface, using a transducer and the reception of the echo from the seabed by the transducer itself.

The TOPAS parametric sounder allows obtaining profiles of the bottom penetrated more or less in the sediment to deduce or interpret their nature and structure. It is based on the generation of low frequency sound waves, via the non-linear interaction with the water column, starting from two high frequency and high intensity signals.

The SVPlus sound speed sensor, from Applied Microsystems LTD, is a self-content and multiparameter instrument, designed for acquiring sound speed measurements in the water, temperature and pressure.

It is a sampling system that allows carrying out linear trawling on the surface of the bottom for the quantitative study of the benthonic and demersal fauna.

This type of dredge, is also known as a box corer, as it allows for obtaining a column of practically unaltered surface sediments, which preserves the original internal structure of the sample. These conditions allow observing biogenic tracks and certain depositional characteristics.

It consists of a rigid and heavy body that is activated by collision with the bottom when it is left to fall. When it hits the bottom, a bucket is activated inside the body of the dredge in the inverted position, in other words, with the opening towards the bottom, and that turns suddenly to collect the sediment underneath the dredge.

It consists of a wrought iron structure, in a parallelepiped shape, with an opening of 100×30 cm and a wall of 50 cm. The front part, or mouth, has bevelled edges to cause the least impact on the bottom, while the back part is knotted to a net with an 8 mm mesh that is used as a sack to receive the material the dredge dredges up during the trawling. The mesh may be protected, as is this case, with some leather straps that cover the net and protect it from getting caught, at the same time as protecting the structure of the bottom. A chafer is also sewn onto it to increase the protection of the mesh.

During the campaign, 2306.17 km of multibeam and parametric profiles were covered. A total coverage of the areas we wanted to scan in the first part of the campaign was carried out. The magnificent meteorology and availability of the screw has contributed to this. We are currently processing the bathymetry, reflectivity and, subsequently, the data from the parametric probe will be analysed using Kingdom Suite.

One of the most significant places in the area is the volcanic cone that configures the Gazúl mud volcano. An intensive sampling has been carried out on this structure, both on the sides and on the summit, with the different samples techniques described above. Sampling with the box-corer has allowed characterising the sediment of this structure, made up by muddy breccia that usually appears covered by a fine layer of muddy-sandy hemipelagic sediments  The linear trawling with the beam trawl and benthonic dredge have allowed recovering large amounts of slabs, crusts and some carbonated chimneys. Due to the large amount of samples collected in the mud volcano, collapse depressions and adjacent areas, a comprehensive study in the laboratory will be necessary to characterise the faunistic associations present related with the type of substrate and sampling area. The presence of a large amount of sponges and some examples of cold water corals and live black coral should be indicated, together with accumulations of fossil coraline skeletons in different areas of the Gazúl mud volcano. With regards to the collapse depressions and pockmarks, it has been observed that the associated fauna is different from that found in the mud volcano, although a more detailed study is necessary in the laboratory that allows establishing the differences between the sampled study areas.

As regards the benthonic and demersal communities, the main sampling areas have been the Guadalquivir surface gas field and surface diapir structure, where the faunistic community found is represented by gastropods such as the Turritella communis and Mesalia varia or the Abra alba bivalves and the Gazúl mud volcano, associated pockmark, collapse depressions and adjacent areas. In this case, the area with the greatest biodiversity is centred in the mud volcano, where fields of sponges and the presence of live colonies of the Madrepora oculata coral have been found. This is probably affected by a greater availability of hard substrates as a result of the formation of chimneys and slabs due to the bacterial activity and escape of gases. The faunistic community in this area is also represented by the cnidaria. 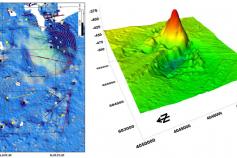