The start of the July campaign coincided with the celebration of the centenary of the TOFTEVAAG sailboat, the ALNITAK investigation platform. At the press conference held on 2 July in the marine reserves and fishing base facilities on Alboran Island and the Cape of Gata-Nijar several authorities attended, most notably among them were the Director of Fisheries and Aquaculture, Alejandro Polanco Mata and the Director of the Fundación Biodiversidad, Ana Leiva.

During this campaign which took place between 1 and 15 July a total of 4 days of work were completed covering a total of 125.1 km along the route between Almeria marine reserve and Alboran Island, and a total of 163.5 km in the area of planned transects for July 2010.

During the journey between the surveillance base in Almeria and Alborán Island there were 8 sightings; 2 common dolphins, 3 striped dolphins, 1 common or striped dolphin, 1 of an unidentified dolphin and 1 Cuvier’s beaked whale. As for the seabirds, there was 1 Audouin gull, 27 ashy-backed shearwaters and 13 common petrels.

During the work in the area of the planned transects 10 sightings of dolphins, 7 of common or striped dolphins, 2 of bottlenose dolphins, 2 of unidentified dolphins, 2 of a grey sperm whale and 1 of a black sperm whale were recorded. The groups of dolphins encountered were generally found scattered and in small groups and two of the sightings recorded very likely corresponded with sightings recorded moments before since they happened exactly in an area where the transect started and finished. As regards the seabirds, a total of 128 individuals were recorded of which 20 correspond to Audouin gulls, 7 to ashy-backed shearwaters and 111 to petrels. Finally, in the area of planned transects an example of a loggerhead sea turtle was recorded.

Sightings from the lighthouse on Alboran island

In this campaign a total of fifteen and a half hours of search effort was covered spread over two days; during the day of 10 and July 11, 2010. Contrary to predictions from the different meteorological agencies the sea conditions were good with the exception of some fog, a factor that always has an adverse affect when estimating distances because all the methods used to this need a clear, cloudless horizon.

An important aspect of this campaign has been the modification of the sampling methodology. After the II Training Workshop of Algerian, Spanish and Moroccan researchers in analytical techniques of cetaceans census data, held in the CENEAM facilities in Valsain during the week from 3 to 7 May 2010, and, once the experts in the field had been consulted, it was decided to adopt a series of amendments to the sampling methodology, so that obtaining sufficient data would make estimating the multitudes from the data taken from the lighthouse on Alborán island a possibility to be explored.

In total 7 sightings were recorded, all of them of bottlenose dolphins. Of the 7 sightings of bottlenose dolphins at least one of them could in all probability, be the same group of dolphins because the group sizes and the positions are fairly consistent. In this campaign two duplicate sightings, i.e. sightings viewed by the two observers were obtained. With regard to seabirds only the presence of a Little Egret was noted (Egretta garzetta).

The first set of data obtained by the CPOD has provided important information in order to improve. In fact, these data were used as an example in the Workshop on the use of CPOD held in March 2010 in Stratslund, Germany and during the 24 Conference of the European Society of Cetaceans. The data analysis revealed that the area in the shallows waters of Piedra Escuela and its surroundings is an area with a large amount of background noise and, therefore, masks possible click trains from cetaceans. A study carried out by Oceanographic in Valencia using the old version of the PODs, the so-called TPODs, anchored in the marine reserve of the Columbretes islands (Esteban and Castellote, 2008) showed noise levels similar to those obtained in this first set of data on Alborán Island. The authors concluded that the origin of these high levels of noise is small Synalpheus type crustaceans. Despite the fact that this type has not been described in the area surrounding Alborán Island until now, there are another 180 species of crustaceans that have been located in Alborán Island and could be the cause of this noise (Templado et al 2006). In any case, once experts in the field had been consulted, the recommendations to follow were; place the CPOD device in areas closest to the surface and further away from the seabed.

One of the overall objectives of Action A14a is to promote the development of new devices and methodologies for monitoring cetaceans. For this ALNITAK, in collaboration with the team from the marine and fisheries reserve on Alborán Island, made its means available to the international technical researchers to conduct tests by their teams in this area with the regular presence of several species of cetaceans. Specifically ALNITAK has started in this campaign to capture data on clicks from different species of cetaceans by means of CPOD devices, data that have been made available to CHELONIA to be used in the development of a new mathematical algorithm for differentiating sounds not only from porpoises and dolphins but also from common dolphins, striped dolphins, grey sperm whales and black sperm whales. To that end, once again due to the excellent cooperation between the research team and the monitoring team from the marine and fisheries reserve from Alborán Island, they have designed a mobile anchoring system consisting of a signalling buoy, a cable 10 m deep in whose end a load of some 10 kg has been tied and, finally, a CPOD acoustic device moored halfway along the cable.

In this campaign data on three species of cetaceans have been taken; common dolphins, grey sperm whales and striped dolphins.

One of the objectives of Action A14.b Analysis of the risks of Maritime Transport in places of special interest for the conservation of marine biodiversity is the tracing of maritime traffic to be done with data from an AIS device, mainly arising from merchant ships.  During this campaign the research team has moved an AIS kit to the lighthouse on Alborán Island. The device basically consists of an antenna and a VHF signal receiver device, a GPS and a data capture 'shipploter' management programme.  The software that manages the capture of AIS data was switched on during the two days of sightings carried out from the lighthouse on Alborán Island by the researchers from ALNITAK. The data obtained in these periods will be sent to the person in charge of the action who will incorporate it into the rest of the data from other sources and places for proper analysis. 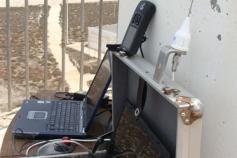