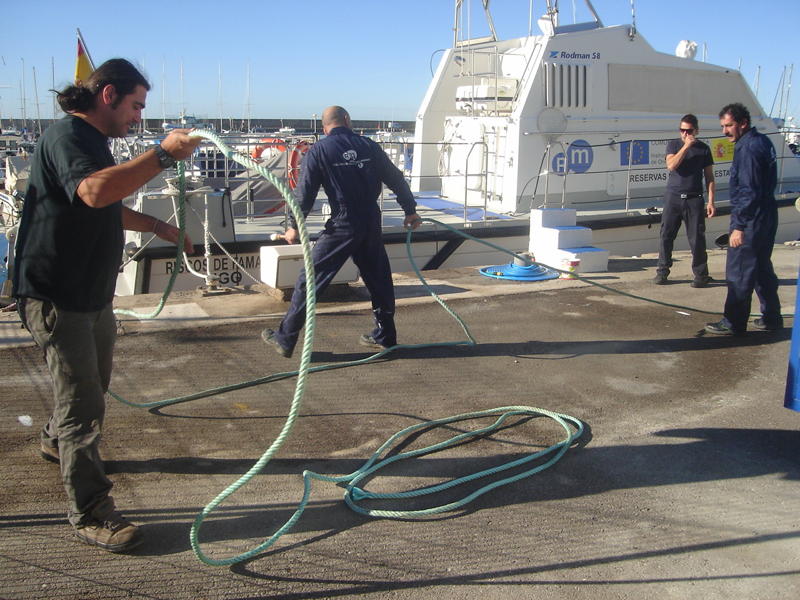 The weather conditions during the final campaign of 2009 were even worse than those recorded in the September campaign. It was conducted between 25 November and 4 December and it was only possible to leave to navigate on 28 November.

Taking into account the previous campaigns it was decided to give priority to cover the Alboran Island area transects. In order to optimise the hours of sunshine in the area of study the team left the port of Almerimar early so that it was able to start working from dawn to dusk. In total they were able to complete almost 10 hours of sampling of which 9 took place in optimal conditions. The sightings were satisfactory; 11 sightings of cetaceans and more than 100 examples of seabirds were recorded. Regarding the species of cetaceans there were 4 sightings of dolphins, 2 of common dolphins, 2 of striped dolphins, 1 of common or striped dolphin, and 2 sightings of fin whales were observed. As for the birds, 4 Yellow-legged gulls, 14 Audouin gulls, 1 Ashy-backed shearwater, 1 Puffin, 1 Kingfisher, 5 common Petrels, 13 Great skuas, 2 gannets, between 72 and 82 gnatcatcher gulls and 3 Phalaropes were recorded.

Undoubtedly, the most prominent of sightings of cetaceans in this campaign have been the fin whales. The identical size of group in both sightings (2 individuals, an adult and a sub-adult) and the space travelled at the time taken between the two sightings indicate that it is likely that both sightings correspond to the same group of animals. Although this is yet to be confirmed, the more accepted idea among the Mediterranean cetologists is that, at least some of the fin whales who visit the waters of the sanctuary of the Sea of Liguria come from the Atlantic, they enter the Mediterranean via the Strait of Gibraltar in the winter months and return to the Atlantic in the summer months. According to this theory, the humpbacks recorded in this campaign could be a group that was migrating to the East.

As for seabirds, in this campaign we have also had some interesting data. In particular 5 common petrels were recorded, that while being a species that has been recorded relatively frequently in the study area in previous campaigns, the fact that they have been observed at this time of year is very interesting because it is not known what the Mediterranean petrels do outside the breeding period. On the other hand, after consulting experts from the SEO, the sighting of 3 examples of phalaropes, probably grey phalaropes (Phalaropus fulicarius) could be confirmed.

On 25 November thanks to the collaboration of Oceanographic, City of the Arts and Sciences (Valencia) a calibration of the two CPOD devices with those of ALNITAK was carried out as part of the INDEMARES project. The aim of this test was to check that the two apparatus are recording the same information so that the data obtained in future by both devices are comparable. Taking into account this objective the two devices, joined by adhesive tape, were placed in one of the dolphin pools with several examples of bottlenose dolphins. The results of this test show that some of the values resulting from the analysis of data for each CPOD are different. These results have been sent to the company Chelonia Limited for analysis and assessment.

On the other hand in the September campaign the acoustic device which was anchored on 31 July to the “shallow waters of the Piedra Escuela” and that was lost from the anchoring site due to the strong eastern storms could not be recovered. In recent months the data obtained by the CPOD have been analysed by obtaining different click trains that have been identified as dolphins.

During this campaign a more robust anchoring system has been working to ensure, or at least minimise, the risk of loss of the acoustic devices that they will house. As soon as it has been established that the anchoring system once fixed in the desired point has been maintained over time the CPOD acoustic system will be positioned. 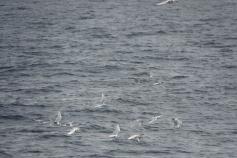 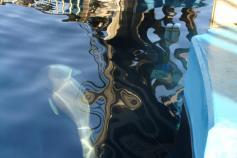