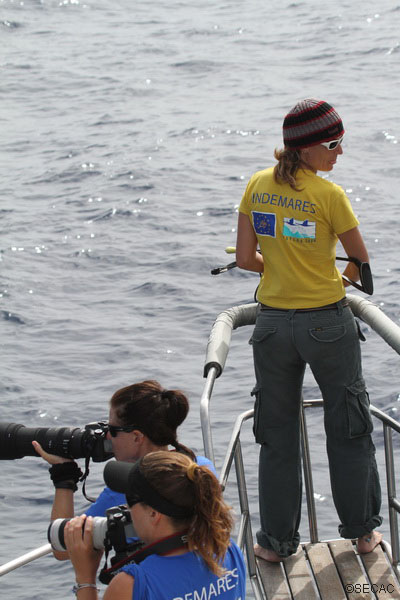 On 1st October, the Oso Ondo boat departed from its mooring in Puerto Calero heading for Morrojable in Fuerteventura. Although the sea forecast was good, the first 5 days were windy, with a force of 3-4 on the Beaufort scale, which forced us to make transects near the coastline, with a lower influence of the wind and the swell (with waves of up to 3 metres). In this sense, it should be pointed out that the conditions throughout the campaign were not favourable, with two days when the boat did not leave the port.

The campaign was carried out during 16 days, with 83.36 hours of work and 1021 km of work, and where 69 sightings of 15 species of cetaceans were recorded. The species with the most sightings was the Atlantic spotted dolphin (Stenella frontalis) with 16 recordings distributed across the entire area, from the coast up to over 20 nautical miles of distance. We made 10 recordings of bottlenose dolphins (Tursiops truncatus) and 9 of tropical pilot whales (Globicephala macrorhynchus). The groups of both species were found in the area at different depths, especially around the “banquete de Jandía”, and in some sightings both species were associated. Another 3 species of delphinidae found were: the rough-toothed dolphin (Steno bredanensis) with one sighting, the striped dolphin (Stenella coeruleoalba) with two sightings and the grey dolphin (Grampus griseus) with 2 sightings. We sighted three species of sperm whales: the pygmy sperm whale (Kogia breviceps) and the dwarf sperm whale (Kogia sima) each with one sighting. The common sperm whales (Physeter macrocephalus) were acoustically detected with the trawl hydrophone and sighted at hundreds of metres of distance from the boat. The group of 3 dwarf sperm whales was filmed on video for several minutes at a sensible distance. The pygmy sperm whale sighting was a mother with her baby. The Ziphiidae Family was represented by 11 sightings: 5 of Cuvier beaked whale, (Ziphius cavirostris), 3 of Gervais beaked whale (Mesoplodon europaeus), 3 of Blainville beaked whale (Mesoplodon densirostris). The presence of babies in two of the Cuvier beaked whale groups and in one of the Gervais beaked whale groups was observed. We observed three species of rorqual whales: a Bryde’s whale (Balaenoptera brydei), a sei whale (Balaenoptera borealis) and a common minke whale (Balaenoptera acutorostrata). The last two species appeared together in a single mixed sighting. The common minke whale was curious and interested in the boat, and this moment was used to obtain a biopsy using a crossbow. In 10 sightings carried out at a great distance from the boat and in bad sea conditions we could not determine the species.

The results highlight the diversity of cetaceans present in the study area, particularly deep divers such beaked whales, sperm whales and pilot whales. We carried out 294 acoustic stations of one minute, detecting in 279, i.e. 94.9%, several species of cetaceans such as sperm whales, dolphins and pilot whales. A total of 19 biopsies of 5 species were obtained: Atlantic spotted dolphin (n= 9), bottlenose dolphin (n= 3), tropical pilot whale (n= 2), rough toothed dolphin (n=4) and common minke whale (n= 1). Apart from the bad weather, the bow platform designed for the pneumatic support boat, Chacalote, was pulled off by a knock against the Oso Ondo due to the swell while waiting for beaked whales. Fortunately, Chacalote’s spinnakers and the rigid structure did not suffer any damage. 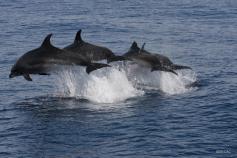 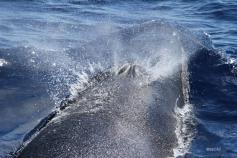