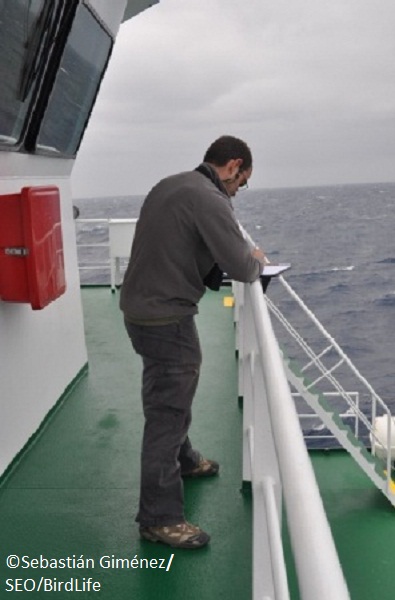 The data presented here were obtained between June 7th and 21st 2011 on board the Miguel Oliver oceanographic vessel based in the port of Vigo. The main objective of the INFUECO 0611 campaign was to identify and map the biogenic habitats and characterize benthic and demersal communities.

The seabird censuses were done on the journeys between the different sampling stations or during daily navigation. Seabird censuses were taken by using transects, following the Tasker et al. (1984) standardized methodology adapted by SEO BirdLife (2007) to the area under study. During the census-taking with transects, data was also recorded data for sightings of other fauna: cetaceans, tortoises and other pelagic animal species from other groups as well as foul other than seabirds. Observations were also made of fishing vessels and other boats in a three km strip on either side of the vessel.

During the campaign, a total of 213 ten minute transect census units and a total distance of 672.9 km were covered over a 384.6 km2 prospected area. Over this itinerary, 291 seabirds belonging to six different species were recorded in the transect censuses (133 of which were within the census strip). The most abundant species was the Cory’s shearwater Calonectris diomedea, while the presence of Bulwer’s petrels Bulweria bulwerii, yellow-legged gulls, Larus michahellis, white faced storm petrels Pelagodroma marina, red-billed Tropicbirds, Phaethon aethereus, and sandwich terns, Sterna sandvicensis, was less numerous.

Fish and jellyfish were also sighted during these censuses. A total of 33 sightings and 49 individuals of four different species were sighted. Noteworthy was the sighting of one sunfish individual (Mola mola) and one whale shark (Rhincodon typus).

Fifteen vessels of varying characteristics were observed as well as various types of rubbish, including 11 different observations of various items generated by humans (bottles, a pallet, plastic bags, sticks, plastic bottles and a drum) in addition to a tree trunk.

The participation of SEO/BirdLife in the INFUECO 0611 campaign enabled information to be expanded on the distribution of seabirds in Canary Island waters, and particularly in an area that had barely been prospected before, that is, southwest Fuerteventura.

Because this was a multidisciplinary expedition, the possibilities for census-taking were restricted to the transit between the various sampling points.  Mindful of this limitation, it can be said that the number of birds under census and the variety of species recorded was very low. Of the six species detected during the expedition, only the number of Cory’s shearwater individuals was reasonably high and could indicate a secondary feeding area, since the main feeding areas are located along the African continental shelf, generated by an enrichment of the associated submarine banks. Neither their numbers nor the time of year make observations of the remaining species noteworthy, although prospecting could be done at other times of year to see whether these waters become more valuable for seabirds over other periods of the year.

It should in any event be said that few groups of birds feeding together were observed, and the few observed were feeding interactions between birds and cetaceans, which were not very numerous with the exception of one on the northern side of the bank where a group of 200 Cory’s shearwaters, some Bulwer’s petrels, storm petrels, and some whales was found. The areas observed where the few feeding groups concurred and where birds and cetaceans interacted while feeding on fish were on the sides but never in the center of the Banco de la Concepción.

SEO/BirdLife would like to thank Pablo Martín-Sosa and Marcos González Porto from the Spanish Institute of Oceanography (IEO) as well as the INDEMARES staff from the Fundación Biodiversidad for its willingness and support in order to have a SEO/BirdLife observer on board to take a census of seabirds on this expedition. We would also like to thank the scientific staff and crew of the Miguel Oliver oceanographic vessel for its support during the expedition.