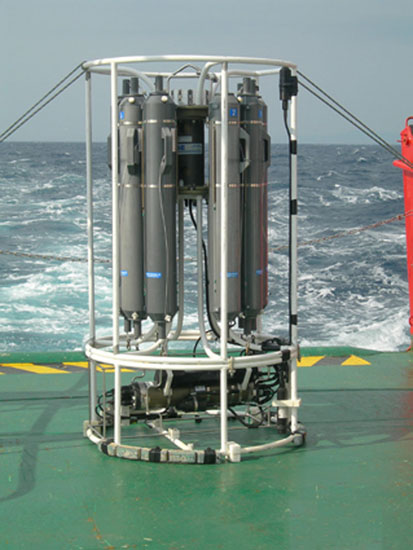 Similar to the calm after the storm, we start a frantic work period on deck after almost no operational activity in order to take maximum advantage of the weather conditions. At night we start to take samples in the canyon thanks to a quiet sea. We use the CTD probe for the first time, which is equipped with a system of hydrographic bottles which permits accurate water collection at different depths. With this we know the conditions of temperature, salinity, oxygen content, concentration of inorganic nutrients and organic matter all along the water column. Once the water is collected in painstakingly washed bottles, it is filtered in some filters, which after freezing, they will be analyzed at the Institute. Activities like this involve the people on deck as well as in the lab, since the water should be processed and filtered immediately. Once the water samples are finished, we end the night by fishing zooplankton.

We give priority to prospections with the ROV at dawn. We start filming with difficulty since the same problems as yesterday arise. But once again, Gavin’s expertise resolves the problem and we start filming in the high area of the canyon. We are able to film for two hours thanks to the excellent weather conditions. The ROV has allowed us to take excellent quality images and to prospect a transect more than two kilometers long. A success. We should remember that an hour-transect represents more than two weeks of analysis work in the lab.

This affirmation means that a ten-day long campaign like this one represents a minimum of six-month work afterwards in the lab. It is easy to feel homesick on the boat, but we are also very aware of the importance of being precise and rigorous when taking samples and during prospection work. If we fail, we will have to wait for almost a year to return to the sea.

The daily activities are complemented with bottom scraping and dredging to collect sediment. The organisms, as well as the sediment, are processed and selected on the deck, which takes a lot of time and sometimes becomes tedious. There is a high level of diversity in the organisms in the samples more frequently than we thought. Some are very spectacular, which not only facilitates the job, but also corroborates the hypothesis we had that we are studying one of the five known areas with the greatest marine diversity in the Mediterranean Sea. 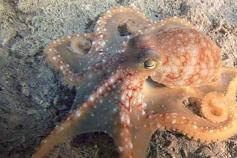 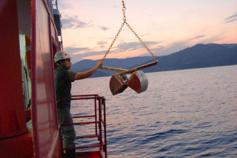