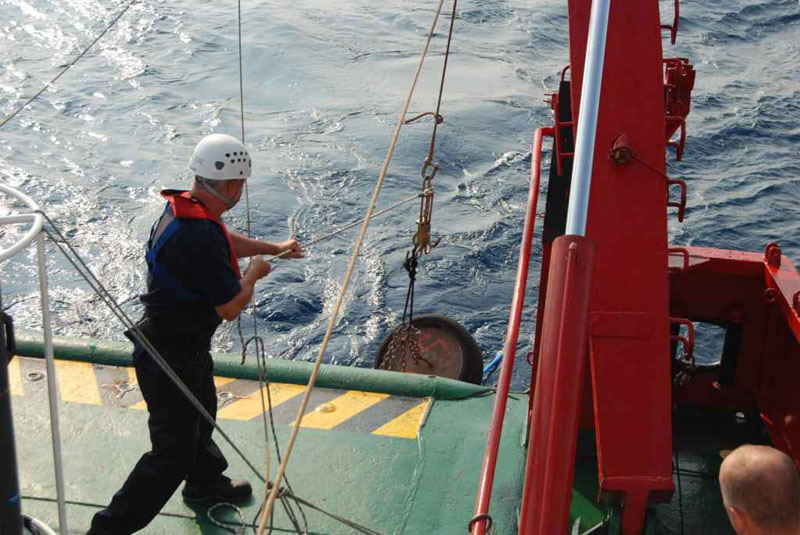 With excellent weather conditions, we willingly start the daily activities despite the weariness accumulated from the previous day. The sea condition is suitable to work with the ROV. The first immersions are focused on the high part of the canyons south wall, where the communities are dominated by pennatulaceans, alcyonarians, holothurians, and polychaete. They are sedimentary bottoms, but due to the constant bottom currents, the particles are transported inside the canyon; this permits these organisms to proliferate without being buried by the sediment. At the same time, these currents transport food so as these suspensor organisms reach very dense populations.

Taking advantage of the fair weather, we anchored the acoustic instruments that our workmates working with cetaceans use. These anchored instruments include electronic systems which record sounds, and from them we will extract the sounds emitted by the cetacean species. These instruments will remain at a depth of 30 meters for a few days, and we will pick them up before finishing the campaign. After the anchoring the instruments, we continue with ROV immersions in the same area, but a little more south to complete the wall inspection. In the images we can observe that they are still dominated by the same type of organisms from the northern area, but in general the richness of the macroscopic species is higher (which can be identified at a glance).

Later we continue shooting film in an area closer to the coast, and here we discover a splendid gorgonian field. These colonies grow on rock bars that are lightly covered with sediment and at a shallower depth, some 90 meters. The proximity to the coast and the presence of rock might have prevented their destruction by the drag nets, as we have noted in other areas in the middle of the platform between the coast and the canyon. Signs of destruction by drag nets are evident due to the presence of smaller colonies, possibly recruited only few years ago, with very few or almost no big ones. The presence of pennatulacean species that are separated by more than 10 or 20 meters, in addition to the shortage of some of the already mentioned macroscopic species, also support the signs. Despite this, we can note that a large part of the area studied during the campaign is sufficiently conserved, and if it were to be protected now, it could recover in only a few decades.

The day ends with a 620-meter dredging inside the canyon, where we have surprisingly collected a rich fauna of polychaetes, as well as other dredgings at 174 meters, but they did not work out well probably due to the gravel density and the calcarean remains of organisms that prevent the dredge to close tight. The captured sediment is lost while the dredge is pulled onboard. 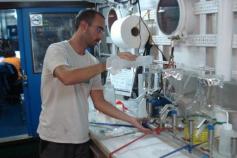 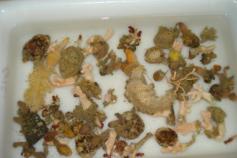